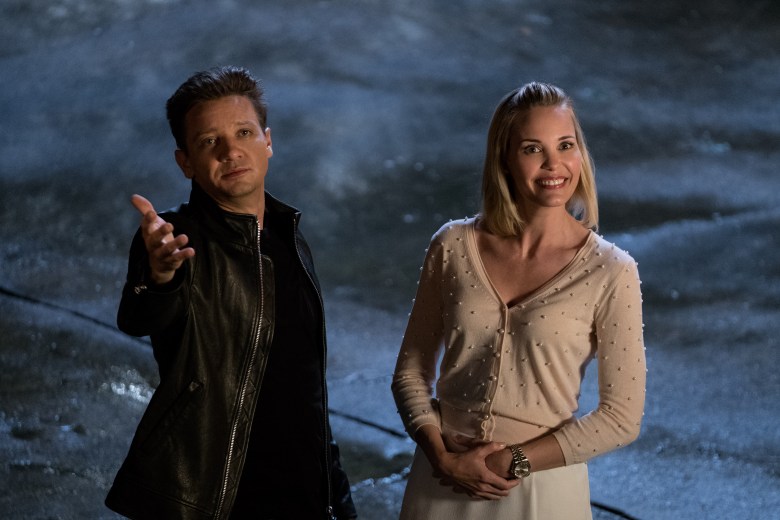 Long before the script for “Tag” made its way to Jon Hamm the actor says he remembers reading the Wall Street Journal article about the real guys who’ve played a never-ending game of tag for decades, a crew of childhood friends whom Hamm and the rest of the cast play fictional versions of in the summer comedy that arrives with equal measures of silly and sweet on Friday.

“I was completely fascinated,” Hamm says. “The thing that really drew me in was what drew the guy that wrote the article in. He sat having a business interview about who knows what, earnings and price ratios or whatever. They’re in a midtown corporate boardroom and another guy walks in, and the first guy jumps up and runs out of the room and they chase each other through the office.

“And then the guy comes back and says, ‘Where were we?’ and the reporter’s like, ‘What the (bleep) just happened?’”

Five years after that article that same scene opens “Tag,” with businessman Bob Callahan, played by Hamm, pursued through his office at breakneck speed by his boyhood friend Hogan “Hoagie” Malloy, played by Ed Helms.

Hamm, Helms and Jeremy Renner, who plays Jerry Pierce, the one friend who in decades of playing tag for the 31 days of May each year, has never been “it,” sat down together earlier this month in a suite at the Four Seasons Los Angeles at Beverly Hills to talk about the film that brought them together and the messages they discovered in its story. (Elsewhere in the hotel, talking with other reporters, were Hannibal Buress, who plays Kevin Sable, and Jake Johnson, who plays Randy “Chilli” Chilliano, the other two members of the movie’s tag team.)

Hamm (“Mad Men,” “Baby Driver”) had been in and out of the movie as it worked its way through development and his schedule changed, but Helms (“The Office,” “The Hangover” series) says he was a solid yes as soon as he read the script, as was Renner.

“I thought, ‘Oh, wow, this is funny, this is awesome,’” says Renner (“The Hurt Locker,” “The Avengers” franchise). “And it had a lot of heart. It reminded me because you were already attached to it” – he nods at Helms – “it already had the bigness of ‘The Hangover’ kind of action to it. But then it had the sentimentality of ‘Stand By Me.’ So it was an easy thing for me.”

The story is simple: Before the end of May and the wedding of Renner’s character, Helms and the others travel from around the country to Spokane to try to tag him for the first time ever. Helms says the shifts between crazy action and pranks as the game is played and the sincere friendships of the players is part of what made “Tag” such a fun project for him, and hopefully audiences too.

“There’s a version of this movie where it’s all ‘game on,’” he says. “And it was important, those more relaxed scenes like the reception, and like when we first see you” – he gestures to Renner. “These hugs need to be big and they need to be genuine and they need to be about the friendship and not about getting tagged.”

Adds Renner: “It feeds into the end of the film. We’ve got to have that camaraderie, the reason these guys play the stupid game. That was so important for all of us.”

All three said they try to find time in their lives as actors to simply play for the sake of playing.

“I still play baseball once a week,” Hamm says. “It’s good to get out in the air. It’s L.A., it’s beautiful. Hit a ball, field a ball, make 10 errors, whatever you do. Win, lose, it doesn’t matter. You’re with your buddies and it is rejuvenating.”

Renner, who is a single father of a 5-year-old daughter, says play is a constant in his life thanks to her and the many other kids in his extended family.

“I’m always a child, more than I probably should be,” he says.

“I’m kind of crafty, like Martha Stewart,” Helms says. “I’ve got a little workshop in my garage and I just love making stuff. I don’t have one currently but I love model trains. There’s something about these activities that you’ve done since a little kid. I’m so present if I’m doing that stuff, I’m not really thinking about anything else.”

And like the characters they portray in “Tag,” all three say they’ve worked to maintain friendships formed in boyhood, finding in those old friends a connection and a harbor that can’t be replaced or replicated.

“I have a group of friends from St. Louis, we’ve known each other since we were 12,” says Hamm, 47. “You lock back into basically the time when you all met. You revert to that time. I mean, I don’t revert to a 12-year-old, but you do to wherever you were in life, and it’s super meaningful.”

Helms grew up in the Atlanta where “Tag” was shot, which gave him an opportunity to get together on days off with some of his childhood buddies “who I’ve known since zero,” he says of a group he got together with on a golf course there.

“We played a couple of rounds –” he says.

“He was down range off the fairway, which should be a safe spot, and I just shanked the hell out of it,” Helms continues.

“He actually sent me a picture of his calf the next day,” Helms says. “It looked like a horror movie.”

Talk of boyhood and simply games inspires them, and soon everyone is laughing about the joys of a good old-fashioned dirt clod fight.

“You didn’t need much, you used whatever was at hand,” Hamm says.

“No head shots, though,” Hamm continues. “We all agreed.

“But that was just what it was, this loose pack of boys and girls, and you’d just decide as a group, which is a great thing about kids,” he says. “There’s no agenda, you just want to have fun, so what’s the most fun we can have? And this ragtag group of kids just shambles along and creates havoc in the neighborhood, but it was all in the name of fun.

“That again is a big part of the larger message of the film,” Hamm says. “Don’t forget to have fun. Life’s hard enough, you can get wound up in it pretty good, but remember those times when you were just rolling around having a good time.”

Renner and Hamm previously worked together in the 2010 heist film “The Town,” but neither had worked with Helms before. But making “Tag” together also made for new friendships, which became clear as Renner described the on-set accident in which he broke his left wrist and right elbow, and Hamm and Helms expressed their appreciation and awe – and like any good friend, a bit of teasing – at how he handled it.

Renner, who prefers to do his own stunts as much as possible, was shooting a bit where he would “ride” a stack of cascading chairs down 20 feet to escape a tag. The rigging broke, he fell the 20 feet onto his arms, and after getting it checked at the hospital discovered the broken bones and was fitted with removable casts.

For one scene he couldn’t do, CGI was used to hide the casts on his arm, but for the most part if it didn’t hurt he did it, and if it did, he found a different way to do it.

“There really wasn’t much I couldn’t do for the most part,” he says.

“Other than door knobs,” Hamm offers, and all three of them crack up laughing.

“If I was around door knobs I was pretty screwed,” Renner agrees. “I was locked in. And people had to dress me, which is kind of demeaning. I can’t put my shoes on and I can’t pull my pants up or my zipper. God!”

“You were a great big toddler,” Hamm teases.

“I resented Jeremy for making it really hard for the rest of us to complain about craft services and all the other minor annoyances,” Helms says.

“We had an early call time today – Jeremy has two broken arms,” Helms joins in.

“But it was also weirdly like a rallying call,” Hamm says. “We all knew J.R. was hurt, so it was kind of like, “Alright, how do we work together to solve this problem?’

“And again, he performed 90 percent of those stunts with busted wings, man,” he says.

“There should be an award for that,” Helms says.

“Well, we made friendships in a movie that celebrates friendships, so that’s the reward,” Renner says.